Welcome back kiddies! This time we welcome David Lillie into the dungeon. Sit back and relax as he tells us about who he is, what he does, and what we can expect from him in the future. Trust me, you will like what you read! 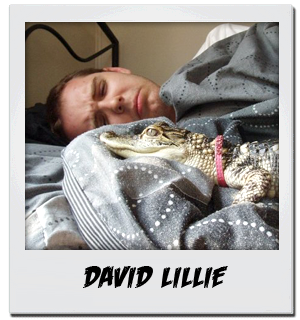 Decapitated Dan: Hey David. Thanks for taking the time to talk with me about Dreamkeepers and any other projects your working on. First of all lets talk about you. Who are you and what do you do?

David Lillie: Who am I... Well, I'm an art college grad who works as a night shift security guard. While it's not the most glory-drenched career, it does give me the valuable opportunity to pay bills while working with my wife Liz on our books. Doing art professionally wound up sapping all my time and energy, whereas now that my joe-job doesn't tap into my creative time I can pursue the comic much more effectively.

DL: It was kind of a boomerang effect. I was a picky kid, so I never read many comics growing up. I drew a lot, though - from the time I was twelve until I graduated high school, I wrote & drew my own 7-part comic series. Art college kept me too busy for creativity over the next four years, but I did have time to snowball an animated series concept with a friend. After researching the business end of Hollywood, I realized it was eminently unlikely a nobody like me could pitch a cartoon and retain creative control. At that point creative control was becoming very important to me, as I was falling in love with the characters and the story... So the natural choice was to return to comics, and enjoy storytelling with no restraints.

DD: So what can you tell me about Dreamkeepers? 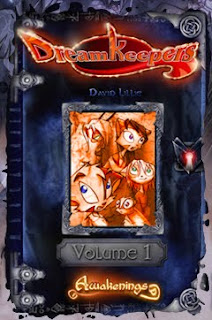 DL: If I could only live once, it's the story I'd want to tell. And by all indications that is indeed the case, so I'm getting right to work. It takes everything colorful and fun that I love about cartooning, and applies it to a story which doesn't pander to children. Dreamkeepers doesn't fit on the fantasy shelf next to the sword and sorcery books - but neither does it match adventure, horror, romance, or humor genres precisely... It kind of has a life of its own. I know that probably sounds terribly pretentious, but the project really does have a layered scope to it. The challenge so far has been using that to intensify the narrative, rather than dilute it.

DL: Demonic nightmares infiltrating the Dreamworld to butcher our otherworldly counterparts, the dreamkeepers. Once they kill off the dreamkeepers, they'll have access to our unconscious minds while we dream, which is a bad thing. (Dreamkeepers are basically cartoonish animal influenced versions of ourselves.) The story begins with some young dreamkeepers who really have no awareness of the events that are beginning to take shape - they have their own personal lives to worry about. But as the impending bloodshed begins to gather momentum, they get caught in the undertow, and in the end become key players in the unfolding cataclysm. I guess I would call it an epic of personal proportions.

DD: Who are the main characters? 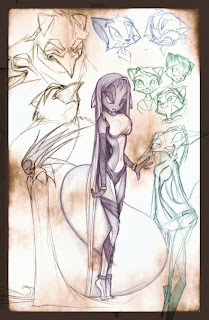 DL: Things kick off with Mace and Whip - two dirt-poor orphans with big plans and a talent for creating trouble. They're contrasted against Lilith and Namah, the upper-class daughters of the elected Viscount - although Namah is illegitimate and concealed from the public. This contributes to her perennially cheery perspective on life. We get to show their childhood back stories in our weekly web comic 'Prelude', which is considerably more light-hearted than the graphic novels. Monsters haven't started eating people yet.

DL: A college roommate and I brainstormed some on the basic premise - what would it be like if there was something to protect our dreams while we slept? What would a story taking place in the Dreamworld be like? Over the summer, I hit the library with books on dreaming, the unconscious, dreams in human mythology and ancient culture... And began to draw up the cast members for the series. I continued doing concept art and developing the idea all through my last year in college, right up until we started the first graphic novel.

DD: What are you hoping readers can take away from this story?

DL: I honestly have no idea. I certainly hope others enjoy it, and the feedback I've gotten so far has been extraordinarily supportive. But really, I just have this vivid, enticing vision in my head of what this story could be. It seems almost like a real and independent thing, and I want to do everything I can to bring it into the world properly. 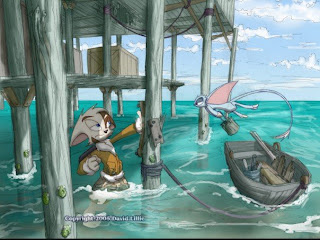 DD: Can you talk a bit about the coloring process on your books. From what I have seen this is one of the highlights aside from the story.

DL: Photoshop and I get along rather well. My stint in art college was useful in exposing me to some of the lighting techniques used in digital animation... Although I don't apply 3-D software to Dreamkeepers, the lighting principles and experience show. Everything is done manually in Photoshop with layers and adjustment layers - I actually have a brief tutorial up on Youtube that shows how it works. The end goal is to do more than simply create a believable alternate reality, of course. The settings must have mood, impact - they're really an unseen character all their own. Creating something immersive for the reader is always a goal, and I believe helps magnify the impact of the events being portrayed.

DD: When all the volumes are done, can we expect a larger book collecting them?

DL: Certainly! I'm expecting a collection someday, and self publishing conveniently puts me in a position to make those kinds of calls. Assuming I don't utterly fail, of course - but I'm not planning on doing that.

DD: What can we expect from you in the future?

DL: In the next few months, I'll be finishing the 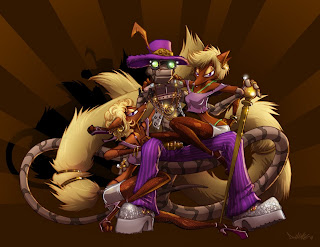 Dreamkeepers website and getting digital book sales available on the first two books. That will dramatically lower the buy-in price for prospective customers, and I hope to expand my audience as I finish the 3rd Volume of the graphic novel saga over the next year or so. After that? I'll start book 4. Eventually I want to be the first independent comic publisher to take an idea truly mainstream, and have the financial ability to publish other creators as well. Or at least that's what I like to imagine as I stroll through my security site at night.

DL: There's a fantastic webcomic titled Lackadaisy that I've been enjoying, and I've also been revisiting my childhood Calvin and Hobbes collection lately.

DD: So in summary give me a quick recap on Dreamkeepers and why fans should give it a try. 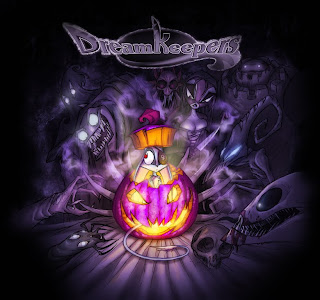 DL: Well, it's good, and neat, and... Alright, I suck at self promoting. Drawing is easier. Listen folks, just read Dan's review, or go to my site dreamkeeperscomic.com - I've posted a ton of reader and professional feedback on the graphic novel page. See what they're saying, poke around, read some of the free stuff, and see if you'd be interested in following what Liz and I are making. We'd love to have you visit.

DD: Thanks so much David. I hope people can jump on board and check out your books. I know I have been really impressed by what I have been able to check out so far.

If you would like to know more about Dreamkeepers please check out David's site dreamkeeperscomic.com
Posted by Decapitated Dan at 6:18 AM