So do you think the world will end when the Mayans predicted it will? I sat down with Robert Heske to discuss his new trade 2012: Final Prayer which is coming out in November.

Decapitated Dan: Hey Robert. Thanks for taking the time to talk with me about 2012: Final Prayer and what else you're working on. First of all lets talk about you. Who are you and what do you do? 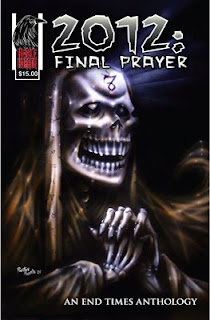 Robert Heske: By day, I am a senior marketing communications specialist who writes all the sales, marketing and promotional content for a company called NewRiver, Inc. headquartered in Andover, Massachusetts. The company is a compliance data and documents solutions provider specializing in e-delivery and is doing exceptionally well in this rocky financial climate.

During lunch hours and at night, I am a screenwriter and comic book creator. I also write a bi-weekly column called IndieCreator for a great little website called investcomics.com. Jay Katz is the founderof InvestComics, and writes regular columns himself for Project FanBoy, The Outhouse and ComicNews.info.

2009 has been good to me - my comedy LOVE STUPID has received funding and will be shot in New Mexico this winter so I will have a feature film screenwriter credit under my belt very soon. I also won a Bronze Medal for my indie horror anthology BONE CHILLER at the 2009 Independent Publisher Book Awards. I'm crossing my fingers to win a Xeric Foundation Grant for my current project, an "end times" anthology called 2012: FINAL PRAYER. That would be a trifecta!

RH: I got into comics late (in my 40s) after I pitched a movie idea and was told to make it into a comic. The story was THE NIGHT PROJECTIONIST and it is being published as an OGN by Studio 407. I was fortunate to have Myriad Pictures option the film, so eventually it will turn up as a movie too. After finishing this project, I realized I really liked the medium. One of my short film scripts called THE WAITING ROOM had been produced into a short film called WAITING (starring Richard Schiff and Izabella Miko); the final product was very good but pretty different from my original vision. I decided to do the story myself as a graphic tale (with the exceptional artwork of Preston Asevedo). THE WAITING ROOM was the marquee story in what became the 1st of 3 indie horror comics titled: COLD BLOODED CHILLERS: Tales of Suburban Murder and Malice. I later compiled the best tales from this collection into an anthology (BONE CHILLER).

RH: It's the best thing I've done so far, and the thing is - most of the work is by other artists. The book is 154 pages with submissions from comic creators from around the world - US, UK, Australia, Brazil, Canada, Finland, Ireland, Italy, Philippines, Poland, Portugal, Scotland and south Africa. Most of the contributors have pretty solid indie comic resumes; however, there are 1-2 newcomers who are already hired to work on other publications after submitting to 2012: FINAL PRAYER. The US cover is by Preston Asevedo and features a praying Grim Reaper. The UK variant cover (about half of the stories are from UK creators) is by Paul Cartwright and depicts Four Alien Apocalyptic Horsemen galloping towards a terrified child holding a stuffed animal. It's great stuff! Even though the book releases on November 15, 2009, you can check out a preview of the book on MyEbook.com or on my website - www.coldbloodedchillers.com. (As an aside, MyEbook.com is a great way to market your book and it's totally free. I recommend that any comic creators sign up for the "Partner" account and take advantage of this snazzy service.)

RH: The theme, obviously, is "2012" - a date many believe could mark Armageddon. REALLY. If you want a quick visual about what 2012 could portend, simply go to whowillsurvive2012.com to watch the trailer for Sony's new epic disaster film. As for my book, it's an anthology featuring multiple 4-8 page graphic interpretations about "what happens on 12/21/12." It includes three stories by myself; "Start Over" with art by Polish artist Adam Swiecki, "Demented" by Irish artist Stephen Downey, and "Synchronicity" by US artist Dirk Shearer with lettering by my good buddy David Paul. As for the other stories, my personal favorites are "Manchester" written by Jim Alexander and drawn by Andy Dodd, "It's the End of the World as We Know It" written by Oliver Masters and drawn by Andy Fish, and "End of the World Party" written by Craig Gilmore and drawn by Heske Horror alumnus Monty Borror. 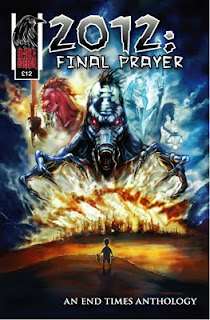 The "extras" section focuses on "what happens the day AFTER 12/21/12." It features a kick-ass graphic tale called "Harkinton" by Duncan Eagleson who was introduced to me by a co-worker. It also includes 3 narrative shorts by some very talented writers you may not have heard of yet - but you will. And, I'm not blowing smoke here, but I honestly believe that this book could become a collectible based on the variant cover and the quality of talent and content. Don't be surprised if you come across some of these tales adapted as books or movies down the road (note: all creators retain rights to their work; I retain unlimited printing rights.)

I should also note the Paranormal angle - the Foreward is written by Jim Harold, the host of the popular iTunes "Paranormal Podcast" and "Jim Harold's Campfire". Marshall Masters, author and publisher of such books as "Planet X Forecast and 2012 Survival Guide" and "The Kolbrin Bible", provides a grim brief essay called "2012 Foreboding. And best-selling author Marie D. Jones offers a more upbeat and ironic perspective in her thought-provoking Afterword titled "End Games".

RH: The inspiration came when I went to my local Borders looking for something edgy to read. I stumbled across the book Apocalypse 2012: An Investigation Into Civilization's End by Lawrence E. Joseph. The book was a compelling read and I thought, "Hey, this is a great premise for my next anthology." I soon realized that, as dark a person as I am, that I couldn't concoct nearly enough "End Times" scenarios. So I created a contest on my website and invited writer/artist tandems to submit 4-8 page graphic tales depicting "What happens on 12/21/12 at 11:11 GST - the end of the Mayan Long Count calendar and which could be either a transformative or terminating event for mankind. The book is due out on 11.15.09. It was just dumb luck when I discovered that Sony was releasing its blockbuster "2012" around this time too.

DD: Can you tell us about how you got the creative teams for this issue?

RH: I posted a contest on my website and publicized it via bulletins on comicspace, Facebook, LinkedIn comic groups, etc. I also contacted a few indie comic creators whose work I respected and asked them to submit. Despite the short money (accepted submissions received $212 for unlimited publishing in print and electronic media), nearly every one agreed to complete a story. Crawford Coutts and Nichola Wilkinson at Insomnia Publications were particularly helpful in sending talent my way. So the story-telling and artwork is exceptional. Again, you can check out the epreview on MyEbook.com (look for the 2012: Final Prayer book cover on the home page carousel or at the top of the page on the comics section) or view it on my website at www.coldbloodedchillers.com (on both the home page and 2012 anthology tabs).

DD: What are you hoping readers can take away from 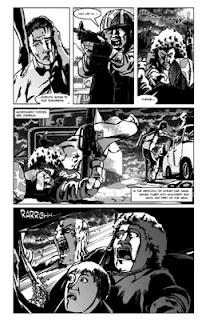 RH: Despite the ridiculously dark subject matter, my goal is not to be a fear monger. I even include two graphic tales with a light (even mocking) take on the 2012 phenomena. Like most people, I am fascinated with the "Armageddon" premise which has been a recurring mystery for most of humanity. We keep hitting predicted "end time" dates ... and surviving. Will 2012 be different? Who knows, but it sure is entertaining - and more than a bit alarming - to explore the myriad possibilities.

DD: Are there any other titles you are working on?

RH: Yes. I've finished writing THE NIGHT PROJECTIONIST last winter and it will be released everywhere as a trade paperback in Q1 2010. The publisher is Studio
407 (www.studio-407.com). The artwork is by Diego Yapura with colors by Jorge Blanco. The editor was Chad Jones. This is another book of which I am very proud. But the star of the OGN may not be the protagonist (a vampire named Dragos who is the night projectionist at a theater and holds his audience captive on Halloween) ... but rather, the mind-blowing art of the aforementioned Diego Yarpura. This could be the most "beautiful" vampire book created. Simply stunning.

DD: Can we expect more from you horror comic wise in the future?

RH: If my wife lets me. I've got two little girls at home and we just got the oldest (she's 3 1/2) over her fear of monsters by renting Monsters Inc. on Netflix. I plan to do an OGN with the eerily talented Monty Borror based on adaption of a contest-winning short script I wrote. This should come out late 2010.

DD: Can you talk a bit about your experiences so far in comics?

RH: Frustrating and fun. In a little over one year, I've cranked out quite a bit of work. Much of it high quality thanks to the talented artist and letterists I've been fortunate enough to find on the Internet. I'm still losing money, but building my brand and having fun. And I greatly appreciate guys like you, Decapitated Dan Royer, giving me a platform to promote my work. Your From the Tomb Magazine is a God-send for horror fanatics, and so is and we hope you continue to pump out your great work.

DD: What was it that got you interested in horror comics?

RH: I've always been a fan of Eerie and Creepy comics. And I love horror movies and ghost hunter reality series on television. But if I ever met a ghost, vampire or zombie in person I'd probably be a real chickenshit. 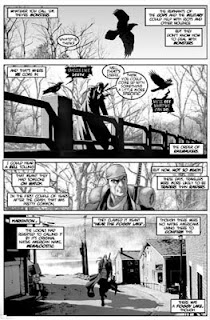 RH: Arggh. Here's the part of the interview where I fall on my face. Truth is, I've been too busy and poor to buy a lot of comics. Although I did recently read THE SURROGATE on a kiddie vacation and enjoyed it very much.

DD: So in summary give me a quick recap on 2012: Final Prayer and why fans should give it a try.

RH: If you are going to spend $15 reading or watching anything on 2012, spend it on this book. It offers the most entertaining, engaging and unsettling perspectives on the topic anywhere. It's one-of-a-kind in that it combines graphic tales with short stories and brief essays. And, like the 2012 buzz, the book is truly a "global event" representing the far corners of our planet. 2012: FINAL PRAYER will introduce you to some unbelievable talent you might not normally come across unless you are a true indie comic connoisseur. And, odds are, this little diddy just might become a collector's item. To keep tabs on the release and related news, go to www.coldbloodedchillers.com.

DD: Thank you so much Robert.

If you want to check out any of the works mentioned above please head over to www.coldbloodedchillers.com .
Posted by Decapitated Dan at 10:17 AM