Welcome back kiddies! This time we welcome monster enthusiast Rob Oder in the dungeon. Rob is a Deaditor-in-Cheif for Chris Wisnia’s latest, 96-page graphic novel, Doris Danger Giant Monster Adventures! from SLG Publishing. So sit there and pretend to enjoy it, as he tells us all about his work and much more.

Alright lets start out with a short answer section and get the usual out of the way. 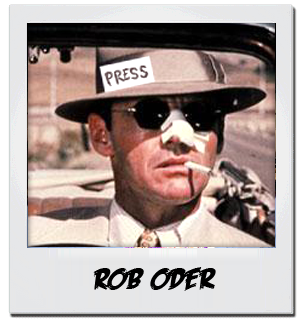 Robert Geisel Oder! Some of my friends call me “Bobby”! I prefer to be called “Rob”!

Married/Single/Dating/Other:
No, yes, yes, and yes! Single, dating, and other, but no longer married (again!)

Pets:
I love animals! All my pets are named after personal friends of mine! Shoo-shoo, Gweeda, “Legs” McPersky, Jim Perv the Dog, Sweetie and Zitti the Borembauck Twins, “Mackin’ Tom”, Dertwah the Great, and Dirty Roy!

Highest Education Level:
High School Diploma, voted most annoying, AND most likely to get on people’s nerves!

First Job:
I began working for Tabloia Weekly Magazine at age 7! I was a shoe scraper! Back then, in those printing press rooms, it got really hot, and with all that intense physical labor, heavy lifting, shoveling coal into the furnace, you never knew what would wind up on the bottoms of those grimy, sweaty workmen’s shoes! Weird, thick green viscous slob! Inches of dried cement! Dead rat entrails! Squish squish squish! And in three years, I’d worked my way up to editor-in-Chief!

Favorite dance craze:
Have you heard of the Chicken Thrust?

Staying with short answers, let’s talk about what you do:

Comic(s) you created Before March 24, 1999:
I never created a thing! I was a journalist for a few years, and I asked the hard questions! But I got tired of getting beat up!

Luckily, that opened up doors, and got me an opportunity to edit Tabloia Weekly Magazine, a position I’ve staunchly clung to for forty-six years! Sometimes with force! I turned the magazine around in the late 1960’s, and now they’ve had tons of unbelievable features! 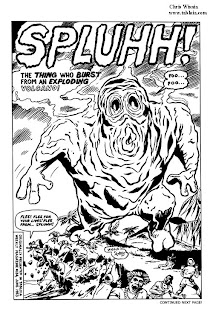 March 25, 1999 - October 4, 2006:
The Lump, Dr. DeBunko: Debunker of the Supernatural, Dick Hammer: Conservative Republican Private Investigator… and Doris Danger, which is a realistic, somber, moving, and somewhat masterful Giant Monster extravaganza! The brand new Doris Danger book collects almost all her previous work to date! I wrote the introduction, the “history of Doris Danger in comics” piece, and of course I compile the letters pages!

October 5, 2006 - End of days:
Well of course, there’s a lot in the works! After Doris’s book release in November, there’s the Spider Twins Companion (an intelligent, comprehensive, and academic encyclopedia of masked vigilantes), the Real-life Adventures of the Spider Twins (our licensed look at the Jill Twins’ masked and controversial “crime” spree), Dick Hammer’s Dailies, Brush With Anger, starring Agent Anger, and Shocking True Stories of the Bible! Then there’s Bride of the Lump, The Lump Meets Frankenstein (the scientist, not the monster), The Lump Goes to Istanbul … The possibilities are endless!

Alright, all that stuff aside, let’s get to the meat of the interview:

What do you do when not making comics?
I like to attend rallies! Although I’ve slowed down, because I like to ask protesters the tough questions! And I got tired of getting beat up!

You get one band to listen to for one full week, who is it?
That’s easy! Professor Panky’s 9-Piece Kazoo All-Stars! They’re fantastic! I go on streaks where I’ll listen to just them for over a year!

But it’s all too upsetting to me! I’d rather we change the subject!

When you were 7 and 14 what were you for 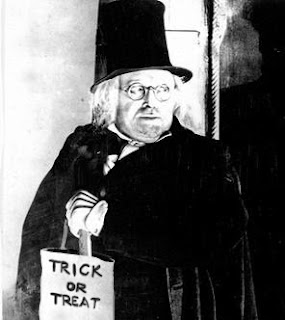 Favorite comic character when you were 8 and 16?
I can’t stand comics! I never read them!

But you’re editor for a comics magazine.
Yeah, it doesn’t make it easy!

King Kong vs. Godzilla fight to the death, who do you root for?
American or Japanese version? Because they have different endings, you know! I root for those Asian woman who are painted brown to look like African Savages! I root for the movie to be over, so we can watch something else!


Evil Dead 2 vs. Dead Alive?
Oh, yeah, Dead or Alive, they were a fantastic band! (humming) “I want surprises”!

Back to comic stuff for now. Knowing that Iceman is the greatest hero of all time, why do you think he is so underused?
What? Knowing that eye smannis …? What? What’s a “sman”? Some kind of women’s make-up? I told you I don’t follow comics! Can’t stand the sight of ‘em! They’re trash! And your sentence didn’t even make any grammatical sense! I don’t understand what you’re trying to ask! 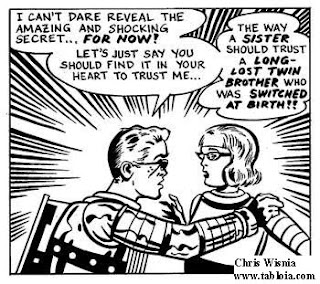 We all know how good you are at editing a long-running tabloid non-fiction periodical, but what did you want to be while you were growing up?
A Prima ballerina absoluta! I was classically trained! My parents had me enrolled in Crude Bay’s most expensive, strict, prestigious, disciplined ballerina academy!

It broke their hearts when they learned I’d gotten the job scraping shoes at the paper!

Sometimes late at night I’ll put on the demi-pointe shoes, or tutu, and reminisce about what could have been…!

Where is the real money in comic creating?
Well, our non-fictional True Stories of the Bible always sold well!

When you’re editing comics, what’s going on around you? Music, what kind? Silence? TV on?
In the Tabloia offices, there’s always a lot of shouting! Like people sounding like they could break into a brutal fight at any moment! That kind of shouting!


10 years from now. Where do you see yourself?
Well, Tabloia doesn’t offer a pension, so I see myself dirt-caked and homeless in a gutter, foully cursing at passersby and laughing at crude jokes no one else hears, lying under a ratty blanket with Shoo-shoo, Gweeda, “Legs” McPersky, Jim Perv the Dog, Sweetie and Zitti the Borembauck Twins, “Mackin’ Tom”, Dertwah the Great, and Dirty Roy!

Alright we can finish up with a quick word association game. I will say a word, you give me a quick one sentence response. 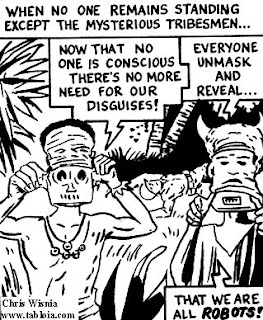 Pot Stickers?
Is that some kind of drug kids are using these days?

Stretch Armstrong?
What??! There you go again – I have to keep telling our staff writers this too: In English, the subject should be PRECEDED by the adjective! And FOLLOWED by the verb! And if your subject is singular, you can’t use a PLURAL verb! And a definite article wouldn’t hurt either! But even correcting all that horrendous grammar, I STILL don’t see your point!

Decapitated Dan?
Is that a new kind of coffee? Like cuppa capitated Joe, or decapitated Joe if you want to get to sleep and don’t want to be all jumpy?

In addition, Rob is actually a fictitious person. Please go to http://www.tabloia.com to learn more about Doris Danger or you can go to the SLG page
Posted by Decapitated Dan at 12:44 PM